Democracy in Motion? Operationalizing Our Values Through the Co-op Index Report

The CIT reveals what co-op workers think about the ability of the co-op to engage the co-op identity.

The Co-op Index Tool offers a mechanism to measure a co-op’s ability to manage within the co-op identity. Created by researchers, developers, and practitioners, the CIT provides several levels of analysis, from a broad overview with four key indices to specific statements on the ability of the co-op to engage values and principles. The CIT reveals what co-op workers think about the ability of the co-op to engage the co-op identity.

The third point can be a bit confusing, but essentially people have agency in their lives regardless of the level of command and 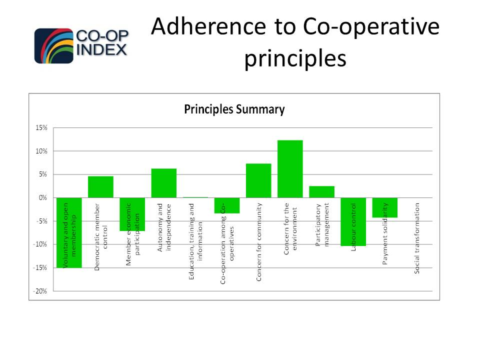 control in an organization. People also have an amazing ability to develop “work-arounds” when a system doesn’t meet their needs. The CIT helps uncover areas where the workers in a co-op may fundamentally disagree with the views of leadership even if it appears to leadership that little or no conflict exists.

The Co-op Index Tool provides a means for co-ops to engage in an analysis of their ability to put their values and principles into action.

The CIT uses a process of triangulation to engage the varied viewpoints. A co-op developer trained in using the CIT provides third-party facilitation and review while participants complete a lengthy survey asking their level of agreement with statements about the co-op. The results may be separated out between management and workers (or other demographic groups) and then compared to each other and to the approved policies and procedures of the co-op. The developer may also interview workers of the co-op to gain greater insight into the responses and areas of disagreement between policy and actual experience. The developer works with a committee to prepare a report and recommendations and presents these to the co-op membership.

The Co-op Index Tool provides a means for co-ops to engage in an analysis of their ability to put their values and principles into action. While many members may simply assume that the co-op succeeds, the documentation helps co-ops reaffirm their principles and value-driven policies much like a financial audit reaffirms that the co-op has managed its money in a principled manner. The CIT can be part of a larger social audit or provide an internal stakeholder analysis for strategic planning. 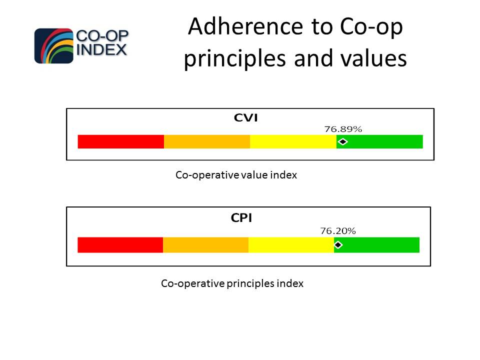 The CIT offers an internal stakeholder analysis even in a consumer or producer co-op. It has been translated into several languages and has a “flattened hierarchy” version, along with versions that have been used in consumer co-ops managing through a staff collective. The CIT uses MS Excel for most of its calculations and through some hard work by CW! Member Jim Johnson, an NWCDC volunteer, Luke Pendergrass, and myself, John McNamara, planning has begun to elevate the CIT to a cloud-based app to allow greater usage. For more information on the co-op index, visit coopindex.coop.