Perseverance and absolute dedication to developing a new wholesale bakery describe Samantha Green, CEO and founder of Lillie’s Gourmet Bakery of Memphis, Tennessee.  It applies equally to her seven sisters and two brothers.   They are all part of the 4th generation that has farmed the family’s land in Tate County, Mississippi since the 1900s.   And today, the 5th Generation of nieces and nephews are also involved in developing this new business.

According to Myra Bentley-Bryant, “Samantha and her siblings have become a beacon of hope for rural women who question whether they can follow their dreams and become successful entrepreneurs.  By her example, she has said to them, ‘Yes You Can!”

It was Samantha’s Great Grandfather, Jeff Green and his wife, Mariah that purchased the land after the Emancipation Proclamation.  Today, Samantha’s brother, Claude, farms the land.  He has grown a variety of vegetables and other crops, including cotton, but the most important one to Samantha is the zucchini.

Recipes for the sweet bread, made from zucchini, were handed down from generation to generation, and as they say, the rest is history.

8 years ago, Samantha and her sister Joyce began by putting together the basic elements of this woman-owned business.  They began by defining their products, all with shredded zucchini as a major, healthy ingredient.   The first products were cinnamon spice, raisin, carrot pecan, and chocolate, produced as 2 oz. regular and 4 oz. jumbo muffins.  Their primary market was farmers markets in Northern Mississippi and in the suburbs of Memphis.   Sisters Gwendolyn and Deborah helped with sales at these markets.  They also approached specialty grocery stores like Miss Cordelia’s in Memphis to carry two-packs of their delicious morsels.

Five years ago, not long after their first season selling muffins at five farmers markets, Samantha and Joyce attended their first Small Farmers and Women in Business Conference, cosponsored by Alcorn State University and the Mississippi Center for Cooperative Development.  It was there that they asked the Mississippi Association of Cooperatives (MAC) to assist them in developing their business.

For eighteen 18 months, the MCCD assisted Samantha,  and her sisters Joyce and Deborah take their initial business planning efforts and expand this into a bankable business plan. 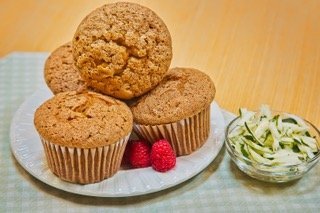 During the planning process, the decision was made to call Lilee’s muffins, Z-MuffinsTM.   During that same planning process, a new line of products was identified and called Mini Z-Muffins, sold in the same flavors as the original sized muffins, but packed as 6, one-half ounce mini muffins, a great size for moms looking for quick healthy snacks for their children.   The mini-Zs were abandoned when Lilees began selling to Whole Foods and Krogers.

At mid-year 2013, Lilee’s developed a new jalapeno zucchini cornbread. The product also took off when it was made available at farmers markets the next year.

Samantha envisioned growing the market for Lilee’s products from the 1,000 muffins per week level—which was an all-consuming process in a two-rack kitchen oven and sold primarily at farmers markets to the 8-10,000 muffins per week that would be sold via a distributor to wholesale food service companies, public schools, and academies, casinos, hospitals, coffee shops, deli’s, restaurants, and local and large national supermarkets.

The immediate challenge for Lilee’s was a chicken and egg issue.  To build the market and gain wholesale and retail customers, they needed visibility, a commercial standalone bakery, and product liability insurance.  But to be able to afford a wholesale bakery, Lilee’s needed sales.

Since they are member/owners of the MSPAG cooperative of Holly Springs, MS, the producers began to sale their eggs to the Greens, which eliminated some of the challenge. Other producers agreed to grow the zucchini that would help to satisfy this growing market.

Within weeks after the commercial facility opening on March 1st, Whole Foods approved Lilee’s as a vendor so that Lillie’s muffins could be in the Whole Foods Store on Poplar in Memphis.   And, the senior officials of Whole Foods pointed out, this was just a start.  Whole Foods has several stores in Tennessee and has just opened a new store in Jackson, MS.

Planning and execution of the plan has marked every stage of Lilee’s development from market development to sales, staffing, and, importantly, food safety.   Lilee’s has, with MAC’s assistance, developed detailed operating policies and procedures, personnel policies, and their own HACCP plan for both conventional flour-based products and for gluten-free.  Samantha has become certified as a gluten-free baker.

Samantha Green was named the Woman in Business for 2014 at the Small Farmers Women in Business Conference, in Jackson, MS.  She smiled and immediately shared credit with her entire family because of their unique talents and skills and commitment to bringing Lilee’s muffins to a broader public.  She also credited MAC’s Center for Cooperative Development with providing the technical assistance to her to grow from a home-based business to a commercial enterprise using the full range of technical assistance tools that it has developed.

Fast forward to the present, Lilee’s has made commercials that are posted on-line.  Today, they manufacture three flavors—Cinnamon Spice, Carrot Pecan, Chocolate, as well as Cinnamon Spice and Chocolate in Gluten-Free. 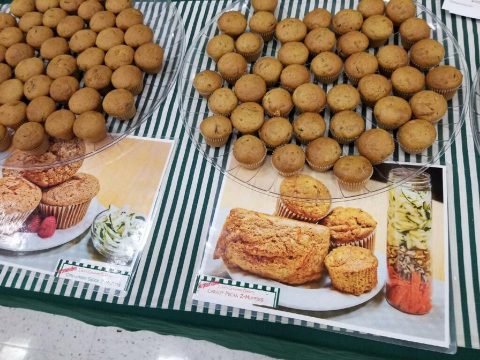 This business alone employs 4 workers full time, along with Samantha our baker.  It remains a cooperative project for both family and the member/owners of MSPAG.